Review: Daniel Half Human and the Good Nazi by David Chotjewitz 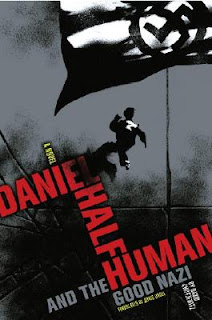 Author: David Chotjewitz
Title: Daniel Half Human and the Good Nazi
Translator: Doris Orgel
Publisher: Atheneum Books for Young Readers, originally published by Carlsen Verlag GmbH (Hamburg, Germany)
Publication Date: 2004, original publication date 2000
ISBN: 0-689-85747-0
Summary:
Have you ever wondered how anybody could get caught up in Hitler’s vision of the perfect race? In the Germany of 1933 as depicted in Daniel Half Human and the Good Nazi by David Chotjewitz, two friends, Daniel and Armin both admire and respect Hitler. Their hearts’ desires are to be a part of the HJ (Hitler Jugend). Then Daniel discovers that he is half Jewish. In Aryan eyes, he is less than human; he is only half-human. He is so ashamed that he keeps it secret even from his best friend. Armin joins the HJ. Daniel cannot join or his secret would be found out and his family would be in danger. With Daniel's acceptance of his heritage, comes a new perspective on the events in Germany. He begins to question Hitler’s views. Then word gets out about his mother’s ancestry through some of his parents’ associates. Armin swears that this will not make a difference to their friendship, but how can it not? Prior to the night Jews are rounded up to be taken to concentrations camps, Armin warns Daniel and his family. News of Armin’s friendship comes to the attention of his superiors. As Armin advances in the ranks, he is put to the test. He must choose whether to follow orders or to follow his heart. Can Daniel trust him with his life? This story is told from Daniel’s perspective after the war in 1945, flashing back to his youth in 1933 through 1939.

Analysis:
All Nazi’s are bad. That is what we have been taught. At first, it is hard to get caught up in something that is so evil, to become a part of the desires of Daniel and Armin to join the HJ; however, David Chotjewitz and his translator Doris Orgel pull you in slowly, by starting with the year of 1945 after the war as Daniel visits his hometown and memories bombard him. Imagery of the smell of coal, a biting wind, teardrops frozen to cheeks, and the sound of marching as soldiers come down the street draw the reader into the world of two boys painting swastika’s on the side of a communist building at night. You feel their fear and excitement as they fight, only to be arrested and sent to jail.
Already, the main characters are defined: the brashness of Armin and the desire of Daniel to be accepted and just as bold as his friend. Armin, although poor, is the perfect Aryan, blond and blue-eyed. Daniel is only described later as not having the hooked nose seen on most Jews. Accurate historical events take place, but you hear it from Armin’s and Daniel’s points of view. The Nazi philosophy is explained as it is taught to the children in Daniel’s school. Their characters evolve as different events affect each of them. Armin gets accepted into the HJ, gradually losing his sense of self, his values, as he becomes a part of the whole. Daniel learns he is half Jew. The prejudice he encounters once the secret is out shifts his beliefs. He begins to see the degradation and humiliation, the wrongness behind Hitler’s vision that he had previously embraced so wholeheartedly.
The descriptions of the city around them, the people in their neighborhood and in their school, give a sense of the 1930’s Germany, from the smell in the bar of beer, schnapps, sweat, and cigarettes with the yellowed JEWS NOT INVITED sign hanging on the wall to the bearded store owner wearing a yarmulke being beaten by the SA (Sturmabteilung - Hitler's private army). German names of people and places are not translated, but are given in the original German language. A section is included at the end of the book that explains the various German terms and names used throughout. It is all of these details and more that bring the culture of Germany in the 1930’s to life. At the end, it is up to you whether you understand what happened, but from the perspective of a child presented here, it is too easy to see how it could happen again.
Review excerpts:
Booklist (September 15, 2004) “The detailed history woven into the fiction...helps make this clearly translated novel an important title for the Holocaust curriculum, especially given the friendship drama that keeps raising ethical questions to the very last page.” (Gr. 7-12)

Horn Book (November/December 2004) “Chotjewitz convincingly presents not only Hitler’s early allure but also many Germans’ opposition to and revulsion with his rising power.... No book stages Kristallnacht more chillingly, its horrors turning on a single event brilliantly manipulated by the Nazis.”
Kirkus Review starred (September 15, 2004) “There are many Holocaust books for children, but this one stands out in its careful dissection of one family’s experience before the war, and in its nuanced approach to the complexity of emotions and relationships under stress.” (12+)
School Library Journal (December 1, 2004) “Orgel’s translation reads smoothly and movingly. An outstanding addition to the large body of World War II/Holocaust fiction.” (Gr 7 Up)
Awards:
Notable/Best Books (A.L.A.) 01/01/05
Iowa Teen Award Nominee (2006-2007)
AJL (Association of Jewish Libraries) Sydney Taylor Silver Medal 2004
ALA Mildred L. Batchelder Honor Book 2005
California Young Reader Medal Nominee 2007-2008
Black Eyed Susan Book Award Master List (MD) 2006-2007
IRA Notable Books for a Global Society 2005 list

Connections:
For students grades 7+, this book can be paired with other historical fiction books like Book Thief by Markus Zusak and Number the Stars by Lois Lowry. A nonfiction book such as Hitler Youth: Growing up in Hitler’s Shadow by Susan Campbell Bartoletti or The Hitler Youth: Marching Toward Madness by Alexa Dvorson can be used to provide further historical background. The Shoah Education Project Web at http://www.shoaheducation.com/aaaa.html is a good resource for teachers to use parts of, depending on the age of the students, providing photos, historical documentation, and slide shows. May we learn to live together and never forget the lessons of the past.