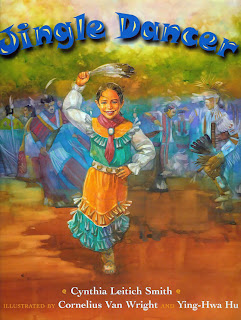 Connections:
Jingle Dancer can be used to introduce the continued importance of dance to many modern-day Native Americans, specifically the Muscogee (Creek) and Ojibway (Chippewa/Anishinabe). History of these tribes can be studied through nonfiction books like The Creeks by Jill Ward (2010) or The Creek by Liz Sonneborn. These books discuss the history and traditions of the Creek tribes of Native Americans. The Ojibwa Indians by Bill Lund (1999) and The Ojibwa by Michelle Lomberg (2004) examines the past and present lives of the Ojibwa people including homes, communities, clothing, food, tools, weapons, defense, religion and beliefs, ceremonies and celebrations, music and dance, language and storytelling, and art. Websites like that from the Muscogee (Creek) Nation (http://www.muscogeenation-nsn.gov/), Native American Facts for Kids (http://bigorrin.org/chippewa_kids.htm ) by Orrin Lewis, a Cherokee, or, Leech Lake Band of Ojibwe (http://www.llojibwe.com/) should be included to compare information provided by the books for authenticity.

Study the jingle dance by visiting its history on the Manataka American Indian Council site (http://www.manataka.org/page685.html) or the Gathering of Nations site (http://www.gatheringofnations.com/educational/powwow_dancers/index.htm). View videos of jingle dancers at powwows from across the country by performing a videos search on Google for ‘jingle dance’. Include a visit from a local Native American tribe during which they may share some of their traditions such as the Gathering of Nations traveling show (http://www.gatheringofnations.com/traveling_show/index.htm).